It is becoming clear that Twitter isn't just a platform for telling the world what you are having for your dinner. Twitter is used as a marketing tool, a news information service and a tool for comedians to test new jokes. It's robustness and message persistence make it an excellent candidate for creating a Message Queue service for those who haven't the inclination for deploying a "proper" MQ service and it can also be used as an alerting mechanism.

For example, I would be quite happy to receive a tweet stating that something had happened to my enterprise application during the night with relevant information like an error code. After all, it is a free way to send the equivalent of a SMS.

Twitter offers a great API and a simple single command can update your Twitter status as such:


curl -u user:password -d "status=This is my first tweet via the Command Line"

But what if curl isn't available on your system? What if you have a suite of ITDI Assembly Lines which you would like to interface with Twitter? Well, nothing could be simpler (until Twitter disable their Basic Authentication mechanism).

An HTTP Client Connector should be created in LookUp mode within your Assembly Line and the connection details updated as such: 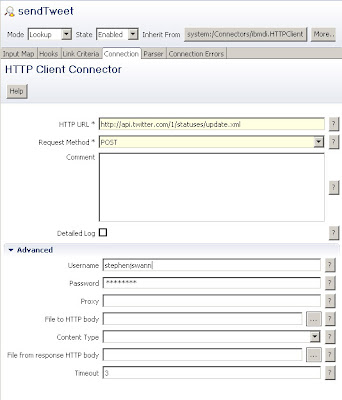 The Link Criteria should be updated to include a status parameter:

And the returning http.body attribute can be converted into a string for further analysis such as checking that the tweet was sent successfully: 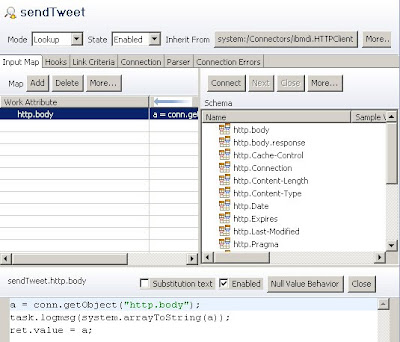 Our sendTweet connector would be a great addition to our arsenal of alerting mechanisms which should already include sendMail, sendSNMPAlert and updateLog.

Next Steps
Building a Twitter Assembly Line which can perform the OAuth authentication would be a natural next step as would a connector which can read a "twitter stream" (as the equivalent of an MQ Consumer).

NOTE: The above screenshots were taken from a TDI v7.0 instance running on Windows 2003 but the concepts can be used in older versions of TDI with little (or no) modification.
Posted by Stephen Swann at 4:42 pm