In my "Twitter and ITDI" article I showed how we can use ITDI to send a tweet and I stated that getting ITDI to read tweets might be a good next step in the process of fully Twitter-enabling our ITDI Assembly Lines. This article will hopefully shed some light on how we could go about doing just that.

The first thing we need to do is create ourselves an ITDI Assembly Line and drop in a FOR-EACH Connector Loop of type HTTP Client. I configured my HTTP Client connector to perform a GET on the following URL:

I slected the Simple XML Parser as a parser for this connector and assigned the Root Tag and Entry Tag as "statuses" and "status" respectively, as such: 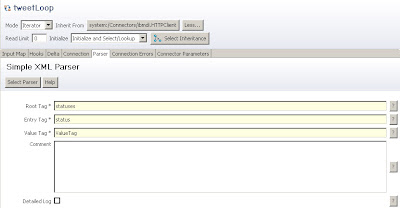 I performed a connection on my Input Map tab, clicked on next and dragged the created_at and text schema attributes to my map.

Fantastic! I now have a connector which will loop around the tweets it receives as a result of performing a GET request on the user_timeline.xml resource on Twitter. So what next? Well, within the loop, I would probably want to drop in an IF branch with the following script in place:


a = work.getString("text");
if (a.contains("#tditest")) {
return true;
} else {
return false;
}
This script will query the contents of each tweet looking for the hashtag #tditest. Any tweet containing this hashtag will invoke the contents of our IF branch. Of course, you could put whatever you want into the IF branch but for the purposes of my test, I dropped in the sendTweet function used in yesterday's article to post a response back to Twitter stating that a tweet with the #tditest hashtag had been found. I'm quite sure there are many more practical actions which could be performed at this stage!

Now the intelligencia reading this will be wondering what use this loop connector is in its present form. After all, once we have read through the tweets that we have requested, the Assembly Line will stop. And if we run it again, it will just process the same tweets again, right?

Right. Unless we expand our solution with a couple of minor tweaks. We can enable the delta processing in our HTTP Client Connector which ensures that we will only ever process NEW tweets. Any unique attribute of the tweet should suffice (and there are a few) but I settled on created_at, for no particular reason: 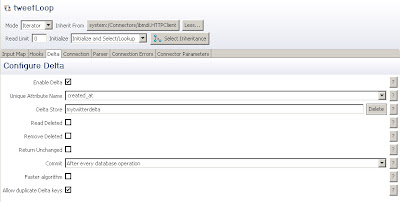 Now I can run my Assembly Line over and over again safe in the knowledge that it won't trigger my IF branch at all unless there is a new Tweet that it hasn't ever seen before. The final step for me was to wrap this Assembly Line in a timer controlled Assembly Line. I created a readTweetsController Assembly Line with a timer function as an iterator and all time attributes set to * (which means the AL will fire every minute). In my data flow, I placed an Assembly Line Function component to call the AL I built above.

The result? A mechanism which polls Twitter every minute looking for new tweets with a particular hashtag and "does stuff" if a matching tweet is found.

So what are the real world applications for such a mechanism? Theoretically, I could:
Of course, there may be better ways of doing any or all of these tasks but using Twitter for non-critical communcations with your ITDI Assembly Lines should be relatively straightforward. After all, we aren't always within easy reach of our laptops, but we rarely go anywhere without our phones and remote management via phone and Twitter could be useful.

Hopefully this article will give you some food for thought.
Posted by Stephen Swann at 8:04 pm