Tivoli Access Manager for e-business' WebSEAL supports the concept of virtual hosting but the documentation surrounding the setup of virtual hosting can sometimes be a little unclear. The diagrams available on Infocenter only help to muddy the waters from what I can tell.

Yet it doesn't have to be so. The concept is actually very simple indeed and can be encapsulated quite easily within a single diagram.

So without over-using words... here's a pretty picture: 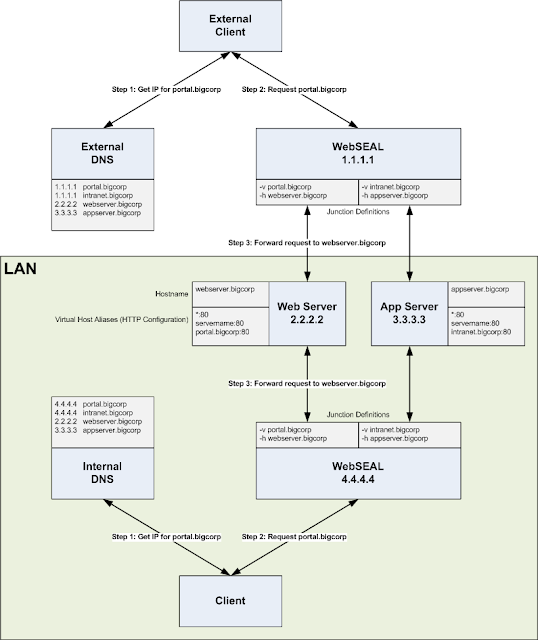 All explained I hope? Of course it is!

Posted by Stephen Swann at 4:27 pm No comments:

What Fix Pack Are You On

In the world of commercial software, patches and fix packs can come thick and fast and it is often difficult to stay "current" despite the protestations of customer support.

How often have you had the following conversation?

User: "I'd like to report a problem with this software you sold me."

Customer Support: "What version and fix pack are you running?"

Customer Support: "Oh. I don't like the sound of that. You should really be on Fix Pack 6 you know. Why don't you apply Fix Pack 6 and see if the problem goes away. If it doesn't, ring me back."

User: "Does Fix Pack 6 address the issue I described?"

Customer Support: "No. But it might be fixed as a result of some other fix."

It's not necessarily possible to constantly apply fix packs that are released every quarter.The thought of regression testing a fundamental component in your architecture may send shivers down your spine. So maybe applying fix packs once every six months or once a year would suffice?

In my TIM and TAM world, I have a view on what is and isn't acceptable as far as fix packs are concerned. I prefer the latest and greatest but am happy to accept certain fix packs and being relatively fit for purpose.

IBM Tivoli Identity Manager
If you aren't on v5.1, what are you waiting for. Life in the world of v5.1 is a much happier experience and is further enhanced once you are on at least Fix Pack 1 (though preferable Fix Pack 5 or later).

IBM Tivoli Directory Integrator
If you aren't on v7.1, what are you waiting for. At last, TDI gets the interface it deserves and the functionality it promised. Apply Fix Pack 3 at least, though, as most of the niggles had been ironed out by then.

RMI Dispatcher
If you are using agentless adapters, you need to ensure you are running v5.1.3 of the RMI Dispatcher at least. The v5.1.2 had a memory leak! Feel free to deploy v5.1.7 though!

ITIM Adapters
Ah - keep a close eye on these bad boys. Try to keep up with them because they tend to only get an update if there are performance problems. It pays to stay current!

IBM Tivoli Access Manager
If you aren't on v6.1.1, what are you waiting for? Upgrades aren't that complicated! Of course, apply Fix Pack 1 but you will find a life of stability and tranquility with the veteran piece of software.

IBM Tivoli Directory Server
It's got to be at least v6.2 but there's not a lot wrong with v6.3 either. If you have a five in your version, you need to sort out your life!

DB2
Like TDS, your life will need sorting out if your version is antiquated. Anything pre v9.x needs replacing. Honestly. Now. Just do it. Give v9.7 your blessing. It will be good to you for a while.

Take the time to stay up-to-date as much as possible. You may find that the customer support conversation doesn't happen in the first place!

Posted by Stephen Swann at 1:46 pm No comments: