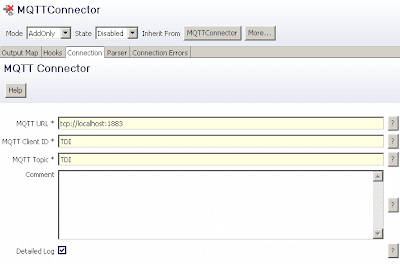 Well this is completely off-topic for me... Pi, XBMC and Android really doesn't fit with the myriad of previous posts on Identity & Access Management and IBM Tivoli security software. So for those of you who are only interested in the latter, you might as well stop reading now.

For those of you interested in how you can build your own media centre for just a few pennies, read on.

The Raspberry PI is a cred-card sized computer that plugs into your television. Having grown up with a ZX Spectrum in my younger days, I was keen to recreate the feelings I had as a teenager fiddling with Sir Clive's version of BASIC.

The Pi has an ethernet port, an HDMI slot, two USB ports, an SD card reader, a power slot and additional audio/video outputs as well as a GPIO for adding your own hardware attachments.

For my project, I just needed an ethernet cable, an HDMI cable, some form of power and an SD card to host my Operating System - Debian6.

Following the instructions provided at raspberrypi.org, I was able to flash my debian6-19-04-2012 image to my 8GB SD card. I then resized the partitions using a GParted LiveCD as attempting to deploy anything on to the image is an exercise in futility as the image provided is TINY!

I slotted the SD card into my Pi, attached the HDMI and ethernet cables and then attached my Amazon Kindle power cable and watched the lights come on and the boot sequence start. 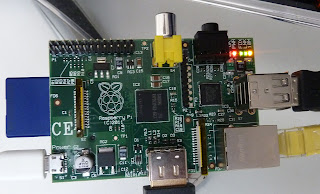 Unfortunately, the image provided doesn't have SSH enabled by default which meant hooking up an old keyboard to the Pi and sorting that out - as such:

The keyboard was disconnected and it was time for some PuTTY action back on my home desktop.

Next up, I decided to install XBMC and thankfully this is a path well trodden so far. In fact, detailed instructions can be found online and it is worth following this thread on the Raspberry Pi Forum.


The following instructions are slightly more detailed and detail the approach I took. NOTE: I have placed the actual files I downloaded on to my own website so I can recreate this procedure should the images "disappear" from the original sources.

So far, so good. Now to install some dependencies which takes a not inconsiderable amount of time:

Next? Install the Raspberry Tools:

At this stage, we are almost finished. I wanted to make sure that everything was bang up-to-date though and threw in some reboots, just to be sure:

And finally, it was time to run XBMC:

Configuring the XBMC settings through the XBMC interface required my old keyboard to be hooked up once again, unfortunately, but this was a "one-off". I enabled the XBMC webserver and added my ReadyNAS Duo as a UPNP source for video, music and pictures. 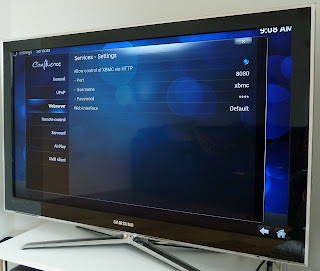 I then downloaded the XBMC Remote software for Android to my phone, punched in the webserver details for my new XBMC installation, and hey presto - I was able to control the XBMC from my phone and enjoy watching a movie on a television that is already DLNA capable :-) 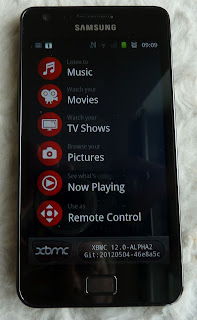 Now, I just need to move the Pi to the bedroom where there is an old television that couldn't even spell DLNA if it had the power of speech.