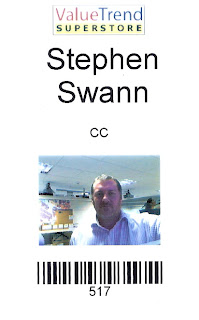 I had the pleasure of spending some time at the IBM Innovation Labs in Hursley yesterday. The idea, bring Pirean expertise in the Tivoli Security space to a retail environment.

Having IBM Tivoli Identity Manager provision to a SAP Point of Sale system, Motorola CA50 VOIP system, Lotus Domino and having ID cards generated as a result was the intention and the result is a slick demonstration of the power and effect that an automatic provisioning tool can have in an environment with a high turnover of staff. Let's face it, retail outlets have a tendency to hire and fire (particularly over the Christmas and holiday periods) that just wouldn't happen in most other vertical markets.

The result is a retail environment that is (at last) fully joined-up and I even  managed to get a souvenir from the experience. A Zebra Quickcard generated ID card with a barcode allowing me to logon to the Motorola CA50 VOIP system (see right).

But what would make the experience even better? Well, enterprise applications should adhere to a few fundamental principles when it comes to exposing an API for user management. That is:

Unfortunately, not every "enterprise" application provides these fundamental abilities. Typical problem areas are the inability to perform a lookup of all users; the inability to suspend access rights and the real heartache that is the lack of a proper delete mechanism! One nameless Cloud based provider doesn't provide a delete mechanism at all and instead the account must be made inactive (although quite how you tell the difference between an account that you want to suspend and an account that you want to delete is left up to your imagination/ingenuity).

Identity Management principles have been around for quite some time now and vendors of enterprise applications have had plenty of notice when it comes to providing either a sensible API for user management or adopting an industry recognised external user repository which can be easily managed.

It would seem, however, that while progress has been made, we're still not quite there.
Posted by Stephen Swann at 9:56 am No comments: